The New York Times recently published an article by Benedict Carey and Robert Gebeloff with the dramatic headline: “Many People Taking Antidepressants Discover They Cannot Quit.” Carey and Gebeloff warn of the withdrawal symptoms that unexpectedly cripple users struggling to wean themselves off their antidepressants, describing “brain zaps” and insomnia, loss of balance and nausea. Carey and Gebeloff also warn of the unexpected side-effects of antidepressants: emotional numbing, erectile dysfunction, and weight gain. 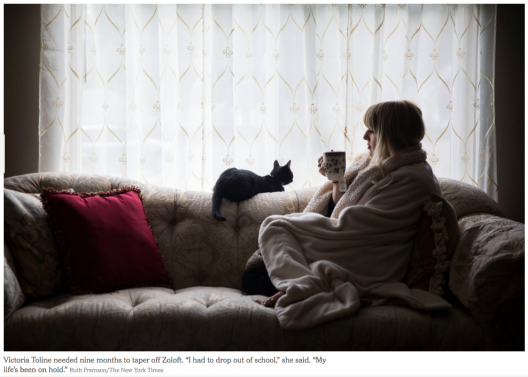 The above photo is just one of the intensely dramatic photos–with equally dramatic caption–accompanying the article. Much like the article itself, the photos–like the one above–imply that antidepressants are a toxic substance mistakenly distributed to weak and unsuspecting women and from which those–brave enough to live without them–struggle to find freedom.

While many of these symptoms have been thoroughly documented, I can also personally vouch for the fact that different medications have different results for different people, and that if your antidepressant is making you feel numb, or making you gain weight, the solution may be as simple as switching to a different antidepressant.

There is a tremendous amount of stigma associated with going on antidepressants, not only from people who casually underestimate the relentless weight of depression but also from doctors who think you are taking the easy way out by popping a pill (yes, I can vouch for that, as well). This stigma prevented me from trying antidepressants for years. Physical ailments are often seen as more valid–after all, I can *see* your broken foot or your swollen knee or the results of an ultrasound–while emotional ailments are dismissed as being “weakness,” the classic obstacle that you should just “shake off.”

While some of the side-effects of antidepressants may not be ideal, the unquestionable benefit remains: you are alive. And not only are you alive, but, ideally, you can get out of bed and move around and maybe get things done.

For those who have not experienced depression, it may indeed be easy to tell someone to “shake it off,” to let themselves feel sad for a bit and then resume a life already in progress. However, for those who have experienced depression, or any other mental issue requiring routine medication, you know the absurdity of that perspective. Depression cannot be shaken off. It is a noose around your neck that refuses to budge. Anxiety cannot be dismissed. It creates a cage around you and will not let you escape. And I cannot speak for those struggling with being manic/depressive or bipolar or schizophrenic, but obviously those people should remain on whatever medication allows them to function best.

The bigger issue for me, mentioned in the article but not emphasized in the article’s headline, is that long-term use of antidepressants is surging in the United States, with approximately 15.5 million Americans taking the medications for at least five years. Interestingly, “adults over 45, women and whites are more likely to take antidepressants than younger adults, men and minorities,” with white women over 45 accounting for 41% of antidepressant users, despite making up only about 1/5 of the adult population, write Carey and Gebeloff.

This begs the question: why?

Why are white women over 45 turning to chemical assistance for serotonin balance? At the risk of over-simplification, why are so many white women depressed?

In 1963, Betty Friedan’s book The Feminine Mystique was published by W.W. Norton. Friedan addressed “the problem that has no name,” which is how she described the widespread and seemingly inexplicable unhappiness of American housewives in the 1950s and early 1960s. The inexplicable part was that women with comfortable homes, dutiful husbands, and adorable children should be beaming with happiness, or so society dictated. Instead, for reasons that mystified many–including those very same women–they were unhappy.

Until Freidan’s book, many women did not realize that others were sharing the same struggles. Each woman–as so eloquently portrayed by the character of Betty Draper (played by January Jones) on the AMC television show Mad Men–assumed that the problem was her own to bear and that, unlike “real problems” such as “poverty, sickness, hunger, cold,” this problem could not easily be seen or understood. Nonetheless, Friedan declared in her book that “We can no longer ignore that voice within women that says: ‘I want something more than my husband and my children and my home.'”

While her book did encourage many women to seek additional outlets, and of course, many women (minorities and those not privileged enough financially to stay home, for instance) were already working, it appears as though, in 2018, women are still unhappy. And it also appears as though their unhappiness, much like in 1963, cannot be easily seen or understood.

Maybe–and this is a question that Carey and Gebeloff should consider–women still want more?

Maybe the issue is not the doctors who overprescribe, or the patients who too quickly take? Maybe viewing the problem through that perspective actually intensifies the sadness and frustration that so many women clearly feel? Maybe the issue is why they are unhappy in the first place? And maybe acknowledging this as a real and actual problem, much as Friedan did in the 1960s, might make some of those women feel better?