My feelings about Whiplash are complex, but one feeling isn’t. I hated it. I hated it with a passion. If I had seen it in theaters, I would have walked out. And here’s why:

Gene Fowler has a famous quote I think of often: “Writing is easy. All you do is stare at a blank sheet of paper until drops of blood form on your forehead.”

That quote is clever because, of course, it’s not really true. Blood doesn’t actually form anywhere on your face. But in movies like Whiplash and Black Swan and Pollock and every other “artistic struggle” narrative, the idea is that you must be tortured by your art in order to be a real artist. If you’re not dying, if you’re not bleeding, if you’re not being driven mad, you’re lazy.

I can buy that — to a point. As an artist (formerly, currently, forever), I’m well aware that genius/talent is only a very small fraction of what brings success. What brings success, as I’ve seen over and over, is hard work and dedication. It’s going back to the drawing board every single day and never giving up. We know this. We know that if it was easy, everyone would do it, etcetera, etcetera. And we know that you’ve got to be just a little crazy to be that kind of person.

And that’s fun to watch. It’s one of the fun parts of The Imitation Game. Alan Turing knew what had to be done — and the only reason he got it done was because he showed up. Every day. Even when they told him it couldn’t be done, he showed up. And as the years passed, eventually, one day, he proved them wrong — but only because he didn’t give up.

So in this respect, Whiplash is nothing new. In this respect, Whiplash would be the same ordinary artistic triumph narrative (see Save the Last Dance). Except it’s not, because there’s more. In Whiplash, the implication is that Andrew would have been good but only averagely so if it had not been for the pushy and domineering role of his teacher, Fletcher. In Whiplash, Andrew’s glorious (and bloody) triumph is a direct result of Fletcher’s sadistic teaching style, which is little more than some of the most twisted psychological mind-play I’ve ever seen.

Fletcher pushes the kid physically (until his sticks drip blood) and mentally (until Andrew seems on the verge of a breakdown). Fletcher slaps Andrew in tempo, throws chairs at his head, and uses personal (and tragic) information about Andrew’s past to humiliate him publicly in front of the other students. Ever the noble professor, Fletcher even tells Andrew that there are no two words in the English language more harmful than good job.

I’m not sure where I would have walked out of this movie if I hadn’t been lucky enough to be watching a screener from the comfort of my home, but that could have been a good time.

I’ve been on all sides of this dynamic. I’ve been the insecure and tortured artist convinced my work was worthless, left in tears in university parking lots after being told by faculty that I was a waste of their time. I’ve been publicly humiliated in front of my fellow students so intensely that they still seem traumatized by it years after the fact. I’ve contemplated dropping out and giving up and walking away and getting a “day job.”

I didn’t, of course. I’m still here. I’m still doing what it was I signed up for. I’m doing it because it’s what I do, and I can’t imagine doing anything else — but am I a better writer and artist and student because of the pedagogical bullying? No. There has never been anything constructive about that kind of treatment.

What makes me a better writer and artist and student? When I’m treated like an adult by my professors. When I get compassion (when I need it), when my ideas are treated as valid and interesting, and when my work is challenged. Not destroyed — challenged.

I’ve also been on the other side. I’ve been a college teacher for the last six and a half years. I’m not a total pushover, but being a sensitive artist myself, I know what a difference it makes to believe in my students. I’ve been told, by some of my students, that I’ve been the first person to believe in them. i’ve been told that I’m the first person to encourage them. And I’ve seen firsthand the work that encouragement produces. I’ve talked to the proud parents who cannot believe their child wrote that or created that or thought of that. I’ve looked at their beaming faces and known that this is why I do what I do.

If you’re going to make it as an artist, you’re going to have a drill sergeant in your head, anyway. You’re going to have that little voice that tells you you’re not good enough and you’re lazy and what have you done today. You are going to compare your work to everyone else — anyway. There’s no need to glorify the masochistic elements. They are just a necessary evil to be domesticated and controlled. And it’s reckless and dangerous and just plain stupid to imply that that kind of behavior is what it takes to be an artist.

Director Damien Chazelle told The Dissolve his view on practice and artistry:

If you’re going to play music or do any art form, just as a hobby or as purely a source of enjoyment, then yeah, you should enjoy it. But I do believe in pushing yourself. If you actually take the idea of practice seriously—to me, practice should not be about enjoyment. Some people think of practice as “You do what you’re good at, and that’s naturally fun.” True practice is actually about just doing what you’re bad at, and working on it, and that’s not fun. Practice is about beating your head against the wall.

Okay, sure, practice should be hard work. Practice shouldn’t necessarily be purely fun. BUT to imply that artists don’t enjoy their process is misleading at best and fucked up and perverse at worst. Being an artist — especially being a successful artist — requires discipline and commitment and repetition. You’ve got to keep going back. But to imply that suffering is an essential and non-negotiable part of the artistic process is dangerous.

Don’t be misled by the jazz. It makes Whiplash feel more sophisticated and impressive than it really is. Without the jazz, this movie would be uncomfortably similar to a story of a young marine being cruelly abused and humiliated by his drill sergeant, complete with the ruthless physicality and offensive homophobia. Only in that movie, the drill sergeant would eventually pay the price (maybe even court martialed), whereas in Whiplash, the final triumphant scene seems to redeem all of Fletcher’s cruelties. The clear message of the final scene is that this would not have happened, Andrew would not have been here, were it not for Fletcher.

I’m unclear why so many people loved this movie, why so many declared it one of the best of 2014. I’m unclear why so few negative responses exist. For me, it was nothing more than a deeply troubling portrayal of the kind of masochism and sadism that, somehow, is not only socially acceptable but glorified in our society. And, worse than that, is acceptable in the classroom as well as considered an essential component of the artistic process. No, this is not how you teach. No, this is not how you become an artist. 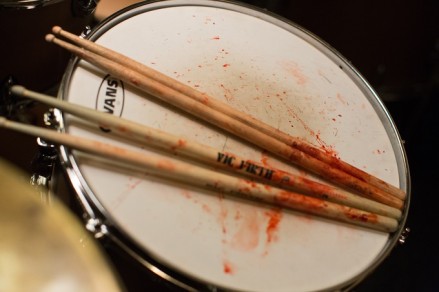