[WARNING: SPOILERS BELOW IF YOU HAVE NOT READ OR SEEN GONE GIRL.]

Judith Butler may have famously said that gender is performed, but what Gone Girl tackles so emphatically is that, these days, almost everything is performed, but most especially and most oppressively, femininity. It is not merely that modern day women are expected to look good, but that they are expected to be cupcake-baking, soccer-game-cheering mothers while also being suit-wearing, boardroom-leading businesswomen. Women are expected to do everything and look good doing it—and, worst of all, they are supposed to make it look easy.

It is this argument that sets Gillian Flynn’s Gone Girl (the book) apart from so many other twist-and-turn thrillers, and it is this persistent emphasis on contemporary performativity that provides the only layer of complexity to David Fincher’s Gone Girl (the movie). Stripped of its postmodern commentary about the ways in which we perform our selves, Gone Girl is really just another who-dunnit with an “I See Dead People” twist about halfway through, which, if it had not been for the unfortunate casting of Ben Affleck, might have been actually convincing.

Unfortunately, Ben Affleck, his romance with Jennifer Lopez notwithstanding, fits too easily into the role of a Midwestern good boy, and we never really believe he could be capable of homicide, much less domestic violence. Sure, Nick Dunne is a doofus who hooks up with a hot piece of ass in the guise of one of his students, but we can barely fault him for that. After all, the movie is so busy hitting us over the head with what an ice-cold bitch his wife, Amy Dunne, is. With her WASPish sterility (did I mention she went to Harvard?), it seems only a matter of time before Nick pursues heat elsewhere. In case we still were not sure with whom to sympathize, the movie makes it pointedly clear that Nick is the kind of good guy who rescues his wife from aggressive and tactless journalists, as well as from overbearing and exploitative parents—and did I mention that he goes home to the Midwest in order to care for his dying mother?

Amy, on the other hand, is a sociopath. Unfortunately for her, the movie portrays her—and Rosamund Pike plays her—in a manner indebted to characters like Glenn Close’s Alex Forrest in Fatal Attraction. If there had been a bunny, Amy would have boiled it. And, in fact, this indebtedness is part of the problem with the film. The tipping point between Amy’s sanity and insanity, between moping around the house and actively planning her husband’s utter destruction, hinges on one night when she happens upon Nick out with his schoolgirl mistress whom he, horrors upon horrors, kisses in the same way he kissed Amy on their first date. The nerve!

Sure, up until that point Nick had been mildly annoying – and by mildly annoying I mean, he played video games and was generally lazy and oafish. In other words, a typical contemporary man. But his primary crime seems to be selfishness and laziness. However, Amy witnesses him in flagrante delicto and decides she will now devote her life to destroying his, coldly and methodically.

The obvious explanation here, of course, is that Amy destroys Nick’s life because she’s a bitch. Because she’s a sociopathic bitch who has been rejected by a man.

The obvious problem here, of course, is that this is a classic Hollywood trope and therefore predictable, cliché, and dull.

The most frustrating part about this is how much more is in the book. While, yes, in the book, one of the primary triggers of Amy’s (de)evolution is Nick’s affair, there is also a much greater issue which Flynn dwells on. Perversely, despite the superficial freedoms available to women today, postfeminism has also contributed to creating a culture in which women are pressured to be and do it all—power moms and power CEOS!—while being subject to intense scrutiny and judgment by other men and women for the ways in which they do (or do not) perform.

Amy is always being held up to standards with which she struggles to comply, starting with her parents, who do not plagiarize from her life for their books, as Amy clarifies, but improve upon it, setting a bar higher than she can ever reach. In Flynn’s book, Amy explains that she has always had to contend with the perfect legacy of the seven children who never managed to be born, Amy being her parents’ first successful pregnancy: “They get to be perfect without even trying, without even facing one moment of existence, while I am stuck here on earth, and every day I must try, and every day is a chance to be less than perfect.”

Adulthood only increased the expectation to be perfect, and effortlessly so, as did her attempts to find romance: “Nick loved me…But he didn’t love me, me. Nick loved a girl who doesn’t exist. I was pretending, the way I often did, pretending to have a personality.” Amy pretends—and pretends effectively for a while—to be a Cool Girl in order to gain attention and approval: “Being the Cool Girl means I am a hot, brilliant, funny woman who adores football, poker, dirty jokes, and burping, who plays video games, drinks cheap beer, loves threesomes and anal sex, and jams hot dogs and hamburgers into her mouth like she’s hosting the world’s biggest culinary gang bang while somehow maintaining a size 2, because Cool Girls are above all hot. Hot and understanding. Cool Girls never get angry; they only smile in a chagrined, loving manner and let their men do whatever they want. Go ahead, shit on me, I don’t mind, I’m the Cool Girl. Men actually think this girl exists. Maybe they’re fooled because so many women are willing to pretend to be this girl. For a long time Cool Girl offended me. I used to see men—friends, coworkers, strangers—giddy over these awful pretender women, and I’d want to sit these men down and calmly say: You are not dating a woman, you are dating a woman who has watched too many movies written by socially awkward men who’d like to believe that this kind of woman exists and might kiss them. I’d want to grab the poor guy by his lapels or messenger bag and say: The bitch doesn’t really love chili dogs that much—no one loves chili dogs that much! And the Cool Girls are even more pathetic: They’re not even pretending to be the woman they want to be, they’re pretending to be the woman a man wants them to be.”

And with that, Flynn nails so much about what is impossible about being a woman, and what was so impossible for Amy. This is who Amy was, until she accidentally fell into a role she did not want to play, and that was when she cracked: “I had a new persona, not of my choosing. I was Average Dumb Woman Married to Average Shitty Man.” Amy’s way out is to create a new narrative, one in which she regains power, one in which Nick is made to pay.

Unfortunately, this complexity is excised to turn Amy into a caricature of every crazy woman out to get her man. That crazy bitch we think, as we laugh—and the audience, when I saw the film today, laughed a lot, because Amy is so very crazy.

The aspect of performance which does come through in the film is the notion of performing perfection, of turning on smiles and kisses as soon as the cameras light up, of improving (or even creating) your self for the camera. We see Amy performing over and over, for the FBI, for the pawns in her scheme, for her fans. We see Nick perform on mainstream television. In this battle of public relations, the facts are irrelevant. As Tanner Bolt, Nick’s lawyer, cautions him, “This case is about what people think of you. They need to like you.” Nick and Amy both need, so desperately, to be liked. Nowadays, don’t so many of us feel the same?

It is unfortunate that someone clearly able to handle complexity as well as Fincher would make a movie that feels so flattened, a movie that seems to have an identity crisis of its own, not funny enough to be a comedy but not suspenseful enough to be a thriller, a by-the-numbers tale only marginally enriched by hints of something greater, hints that anyone who read the book will find conspicuously absent. 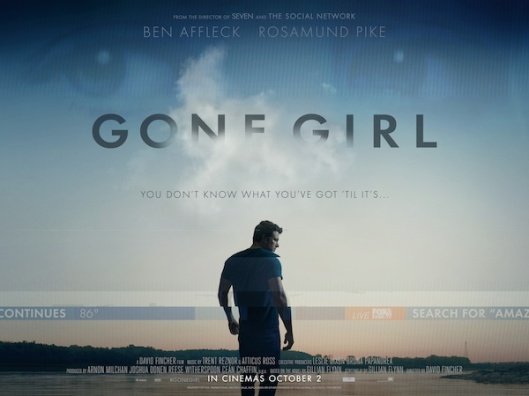