I grew up in America. My family may have spent summers in Israel, but I grew up American. When I finished high school, it did not cross my mind for a minute whether I should enlist in the Israeli army. Not for one second. So off I went to college.

I didn’t have to, so why would I? Why would I carry heavy weaponry and sweat through basic training? Why would I get dirty and tired and hungry in a military uniform and bulky combat boots? I loved Israel, sure, but I never felt a burning desire to defend her. She seemed to be doing just fine, and I certainly was doing just fine without learning how to fire a machine gun.

One of my high school friends, half-American/half-Israeli, believed more strongly in the cause than I did, and so off she went, to serve her time. For her, there was no question. But for me? If I didn’t have to, why would I? I did not think twice.

For many Israelis, it is a rite of passage, something that you do and all your friends do. It is a ritual, a tradition, an expectation. However, I have been told that there has been a generational shift where it has slowly been common, here and there, for Israeli natives to complain about needing to serve, to find excuses and opportunities to avoid it. Even they do not embrace it. And why would they? It’s dirty and difficult and a chore — and it always feels like there are plenty of others who are willing, so why not let them?

Why would anyone do this? Why would anyone put themselves in this kind of situation? I thought human instinct was to avoid death, to be lazy. To lie on the couch and eat snacks. Who gets off the couch and runs headfirst into battle? Who risks their life without hesitation for a cause bigger than any one person?

So I look at their faces and I cry because I feel weak in the face of their bravery. I cannot understand it. I can only admire it. 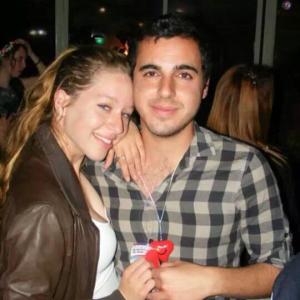 I read about soliders like Sean Carmeli from Texas who decided he loved Israel enough that he was willing to put his life on the line for her. He came to Israel alone, from a small town in Texas, and set his eyes on the Golani brigade. He injured his ankle not long ago, and the doctor suggested that Sean take some time off to heal, but Sean refused, saying that this was his responsibility, this was his job, and that he belonged on the front lines. So off he went, to risk his life for a country where he did not even grow up, only to die last weekend. 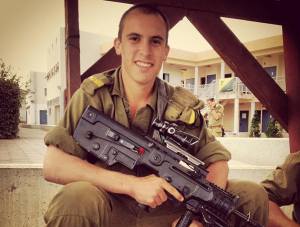 And then there’s Max Steinberg, who came to Israel on a Birthright trip and felt an instant connection to a foreign country whose language he did not even speak. He went home and told his parents that he was joining the Israeli military, and three months later he was back, starting basic training. He told his parents that he wanted to make Israel his permanent home. He, too, had his heart set on the Golani brigade — which rejected him at first, because his Hebrew was not good enough. “Is there anywhere else you would like to go?” they asked him. “Golani or jail,” he said.

They told him he could reapply after a month, so he went home for a visit and then reapplied. This time they accepted him, and off he went, to risk his life for a country where he did not even grow up and whose language he, apparently, could not even speak so well.

I look at the faces of these soliders, so young, so brave, barely twenty-five (sometimes even only nineteen) but full of a bravery and conviction I have never experienced and cannot even imagine experiencing. I cannot imagine being nineteen and being so determined and so strong that not only would I want — against all odds — to be in the military, but that I would insist on being in an elite and dangerous unit. That given the potential out by a doctor to rest my ankle I would insist on heading back to fight. That I would leave my home in Los Angeles or Texas to join another country’s military and to learn another country’s language.

Max called his parents on Saturday to tell them that there had been shooting near him and he was okay but sore. “I have to go back to my friends,” he told them and went back to work. He went back to fight. And he died shortly thereafter.

I cannot stop thinking about these soliders, so young and so brave, and I am in awe of how they are wired. How did they get so strong? Where does it come from, such passion and conviction?

I watched Max’s parents give their eulogy, I waited for hints of resentment at Israel for being responsible for the death of their son, I looked for hints of despair and weakness and anger, but I only saw the same strength I imagined Max had. They were proud, his parents.

“Do we have any regrets that Max enlisted in the IDF as a lone solider?” his father said. “The answer is an unequivocal no.”

(If you want to watch the full eulogy, it’s here:

His parents start around six and a half minutes in.)

I watched the eulogy several times, blown away by the strength of the two of them. There is a photo of his mother, comforting one of Max’s fellow soliders, that breaks me into a million pieces. 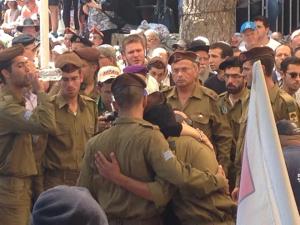 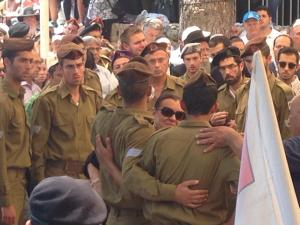 I read posts on Facebook from friends back home, and it feels like they come from another world, another reality. This morning, while out with my mother in Tel Aviv, there was an air raid siren, and shortly thereafter, three loud bangs as if fireworks had been set off around the corner. Only they were not fireworks. They were rocket shrapnel exploding and hitting the ground. Everyone who had ducked into the restaurant in response to the air raid siren waited the requisite few minutes before heading back outside. Life continued as normal. Or as normal as can be expected.

But for soliders like Max and Sean, not only will there never be a normal, but I do not know if there ever was. With their bravery and devotion, with their dedication and determination, I feel like they always led a life different from mine.

If only I could be so brave.

“We cannot be sure of having something to live for unless we are willing to die for it.”
― Ernesto Guevara