In honor of her upcoming album, and the, um, eye-catching new cover art for her collaboration with R. Kelly, I’ve pulled this piece out of the archives:

Recently, the Council of Fashion Designers of America gave their Fashion Icon Award to Lady Gaga. This award has been given out only five times since 1981, with previous winners ranging from the model Iman to the actress Sarah Jessica Parker and the legendary C.Z. Guest. An immediate reaction is to question whether Lady Gaga can be considered an icon already, having only been a public figure for a handful of years.

A more complex question is what Gaga’s fashion represents, since what she represents is clearly very different from previous winners. If Lady Gaga is representative of our cultural zeitgeist, as many others besides the CFDA will argue convincingly that she is, what is she saying, exactly – about herself and about the rest of us?

Popular response is to proclaim her a liberator — of women, of sexuality, of gender. Actually, it’s not only popular response that has proclaimed her as such, she has anointed herself with these titles via her anthem, “Born This Way.” But by calling her fans “monsters,” by emphasizing the freakish and outcast qualities of homosexuality, she may actually be doing more harm than good. By emphasizing that they are damaged, in need of her therapy and leadership, is she really advancing gay rights in America? When she says, “We are not asking you to agree with or approve the moral implications of homosexuality,” the natural response is, what moral implications?

And what about her fashion sense, which isn’t fashion at all? It’s imprisonment by couture. It’s more a bizarre assortment of costumes than a cohesive sense of style, a la Sarah Jessica Parker or C.Z. Guest. Gaga can barely walk in her skirts and shoes. She is often escorted by assistants who prevent her from falling over. She frequently imprisons herself within objects, fakes her own death (in videos and in concerts), or uses crutches. Sunglasses are a frequent accessory, both in videos and interviews, as are massive and obscuring wigs. Her message isn’t about empowerment and strength, it’s about being inaccessible and infirm, freakish and damaged.

There is nothing about Gaga’s outfits that feels empowered or liberated, much less sexual. Even in ripped tights and bras, she feels contrived and awkward, her facial expressions strangely blank, her attitude persistently distant and staged. (It is interesting to me that in the above cover art, there is no face. And that in the album art for her new album, she seems plastic, Barbie-like.) Even in her video, “Edge of Glory,” with lyrics as melodramatic as “It’s time to feel the rush / To push the dangerous / I’m gonna run back to, to the edge with you / Where we can both fall in love,” her face is completely blank, the choreography banal and stunted. She has nothing on the adolescent provocation and flirtation of Britney Spears’ “Baby One More Time,” much less the emotion and charm of early Madonna or anything by Tina Turner. Gaga may borrow Madonna’s chord progressions and outfits, but she cannot recreate Madonna’s sexuality and natural confidence.

The Emperor may be wearing clothes, but there is nothing underneath them.

Sex, for Gaga, is an accessory, an affectation to be mimed at will, with little genuine emotion behind it. In her “Telephone” video, her body is naked, criss-crossed with “Do Not Cross” crime scene tape. There is nothing about her nudity that screams come hither.  Everything about her is manufactured, staged, carefully choreographed by her team of stylists. Even in airports and on her way to the gym, she hobbles in massive heels and bondage-style garb. She is not a powerful women, she is not Alanis Morissette singing “You Outta Know” or Kathleen Hanna singing anything. Lady Gaga, with her awkward nudity and crippling shoes, is not a model for young women. Nothing she wears could really be worn by anyone else except to a Halloween party or one of her own concerts.

If there is no sexuality there, just forced artificiality, maybe Gaga is reflecting the massive disconnect happening in the iPhone generation, or maybe the iPhone generation is so disconnected that they can’t tell the difference. Personal expression now takes place with text messages and 140 character tweets. We experience reality as we film it on our phones, as we read about it on Facebook. Communication is brief, fleeting, and superficial. We are losing the ability to connect on any real emotional level, and Gaga, with her postmodern collage of references and appropriations, reflects the rapidly evolving speed of pop culture.

In our desperate need to feel something, we have become more and more extreme, as it takes more and more for something to penetrate our glazed and over-stimulated consciousness (perhaps this explains the popularity of films like Gravity and All Is Lost?). Gaga supplies a persistent interest in the macabre, death a virtual constant in her videos and aesthetics. She lives to shock, and we live to be shocked, to feel alive, for something to catch our attention and be interesting. “Please don’t be boring” is the mantra of our times, as we watch tv while texting and surfing the internet. Live is moving faster and faster, and it takes more and more to make a dent. Poor Gaga feels the need to impress us, to please us, to raise the bar consistently, making us wonder what she will do and wear next. Is it because she thinks her music isn’t interesting enough without the eggs and freaky clothes?

Maybe she is an icon for the disturbing fact that she represents what we are becoming — adrift, mercurial, detached, sexless, all surface. If so, is this really something to be commemorated with an award? Maybe, in Gaga’s case, we should just ask her to stop dressing up. 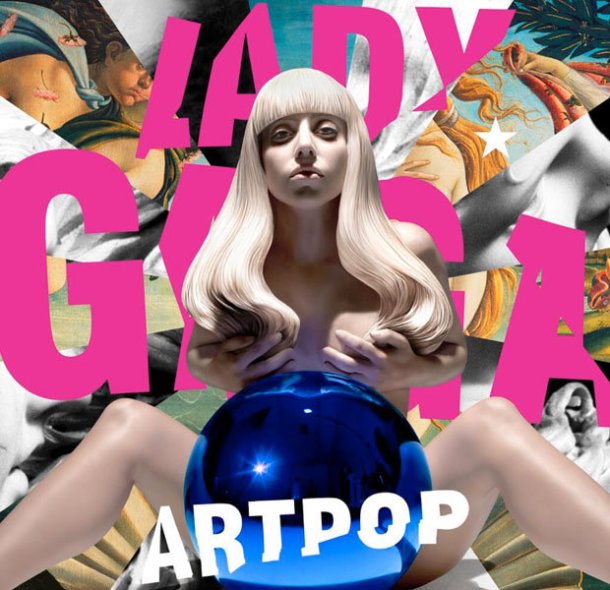