I recently came across the following quote by Tom Robbins from Jitterbug Perfume:

“The unhappy person resents it when you try to cheer him up, because that means he has to stop dwelling on himself and start paying attention to the universe. Unhappiness is the ultimate form of self-indulgence. When you’re unhappy, you get to pay a lot of attention to yourself. You get to take yourself oh so very seriously.”

This is a popular quote, meaning that when you google it, it shows up in lots of places and as lots of different memes. It was even met with an enthusiastic response within the Facebook thread where I first read it this morning. The quote particularly reminds me of the response I often hear following a suicide, when people criticize the ones who have left as being selfish (“suicide is the ultimate form of selfishness” is a line I hear frequently).

When people describe suicide as selfish and depression as self-indulgent, I only have one response: you don’t know what it’s like.

Depression is like a really bad flu that lingers…for months, sometimes for years. You think you’re better and then you push yourself a bit too hard, or you get pulled over by a cop, or you get another rejection, and then you’re right back at the bottom of the well, staring forlornly at the distant light so far away at the top.

When you are trapped at the bottom of that well, when you feel like you will never get back into the light again — you will only act as if you are out in the sun, but inside you are weighed down by the well — that is when you think of suicide. You think of suicide not to be selfish but because it is the only way out of the well. And until you have been in that well, and seen how far away the sunlight can be, you don’t know what it’s like.

Sometimes we can’t leave the house.

Literally the only two things that can make you feel better are time and/or medication.

From an article in The Guardian:

These new neurons correspond to changes in animal behaviours that are associated with long-term antidepressant treatment…Not only that, if you make animals display signs of depression, you can reduce this neurogenesis, and you can reverse both the behaviour and the neurogenesis by treating them with antidepressants.

Antidepressants may increase serotonin in your brain, but the alleviation of depression may be due to the long-term effects of the drugs on neurogenesis.”

The alleviation of depression is not a response to “toughening up” or “shaking it off” but, in fact, a response to actual medical treatment.

This brings me to my next point. There is nothing wrong with being depressed, and it does not mean you are self-indulgent or, even worse, weak. Much as our society likes to treat depression as self-indulgence, it also like to view sensitivity as a weakness. As my beloved friend Jude Rawlins writes:

“The truth is that to be vulnerable in this life takes unbelievable courage and stamina, and the people who manage it are the ones who beautify and enrich the whole world for the rest of us. Original, inspired, egoless and fantastically unusual people are treated as ‘weird’ and dysfunctional. But it is they who make the rest of it worthwhile. The truth is that some days you just can’t get your head off the pillow, but then why should you have to? Who makes the stupid, ignorant rules that fail to accommodate even an ounce of beautiful strangeness and original thought? We need a proper conversation about mental health, and we need to start by deploying the notion that nothing is more insane than conformity.”

Not only is nothing more insane — or more 1984 — than conformity, but nothing is more ignorant than viewing depression or anxiety as self-indulgence, rather than as actual medical conditions. If you are one of the unlucky ones, depression or anxiety may cling to you, refusing to budge regardless of what you do, where you go, or with whom you spend your time. You may force yourself out of the house, only to be reminded that it is the only place where you feel safe. You may force yourself to interact with others, only to be reminded that forming words can be next to impossible when the shroud of darkness cloaks everything.

Your own personal depression or anxiety may be triggered by small things or big things, but once they are there, they will only leave when they are ready — or when nudged out with actual medical care, which may mean therapy, which may mean pharmaceuticals, but which definitely does not mean when you “shake it off.”

“Being in a minority, even in a minority of one, did not make you mad. There was truth and there was untruth, and if you clung to the truth even against the whole world, you were not mad.”

Other people don’t know what it’s like. Only you do. 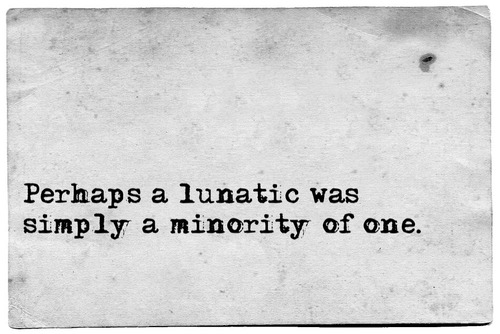